Molecular Gastronomy?  Sounds scientific! But, what does science and culinary arts have in common? Well, according to WebstaurantStore blog,  molecular gastronomy is a “branch of food science that focuses on the physical and chemical processes that arise then cooking. These processes and interactions are explored and manipulated to yield flavorful functional, and artistic results. Molecular gastronomy works because of the interactions of different ingredients that cause various effects. Every recipe has underlying physical, biological, and chemical mechanisms that make the dish turn out as intended.” The day that Chef Cook visited St. Johns Technical HS, he focused his presentation and demonstration on molecular gastronomy.  Chef Cook demonstrated a variety of molecular gastronomy techniques such as emulsification, spherification (creating soft squishy spheres that resemble caviar eggs or pearls), and gelification using agar agar to transform liquids into gels.

In addition to demonstrating molecular gastronomy, Chef Cook also had the students take their turns at identifying exotic and unique fruits, vegetables, and spices often used in delicacies he and his team creates in the kitchen at the Hammock Dunes Beach Resort in Palm Coast. He shared with students how his career began and the journey he took leading to his current position as the Executive Chef, including the benefits of competition and credentials.

Chef Cook has been a valuable partner with the Culinary Arts Academy at St. Johns Technical High School for several years. His time and wisdom are invaluable to the task of preparing our students for careers in the various career paths associated with Culinary Arts and Hospitality. 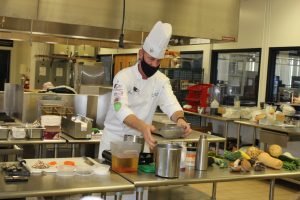 View Articles By Month and Year